It’s been a while since I posted.  The Euros have gone, we’ve had the emotion and glory of the Olympics and the early summer has morphed into the nagging worries of mid-August as we start to notice the sun rising a bit later and the evenings start to come in.

What happened in the rest of the games?  Well we saw Portugal almost get the victory against the mighty Spanish in the first semi-final, unfortunately without the anticipated Ronaldo tear-fest.  We saw the Germans throw it all away against the Italians with their worst performance of the tournament.  And in the final, yes as expected the Spanish tore the Italians apart with more beautiful football in a victory that many people found boring for its sheer ease.

So it was a great tournament, well organised, with some great games.  My personal favourite was Poland-Russia for  its intensity, the atmosphere of which was heightened for me by being in a pub full of people believing that Poland could get out of the group.  As the tournament came to a close the Polish press aimed to try and make some grand conclusions about the impact of the event, What did it say about the country? Had Poland changed and how?  It’s difficult to really see what Poland has got from the tournament but I think it’s clear to say that it was a success and Poles can feel proud of the way they put on the event.  Can any major conclusions be made about it?  I’m going to be a bit of a wuss and say no.  We’ll have to see but well it was fun…

Two days after the tournament ended I headed off to Ukraine for three weeks for a summer school, a genealogy grand tour and a wedding.  In the process I was able to get to two of the cities which hosted Euro2012, Kiev and Lviv.  Would there be any remnants of the tournament there? Well I went to find out.

Firstly I was in Kyiv.  Kyiv is a grand city with a long and turbulent history.  Empires and kingdoms have been and gone here but what we see now is the proud and self-confident capital of Ukraine, the largest European country by area.    What remained of the Euro2012 experience here?  In general there was just the left-overs of a big party with posters and giant footballs still standing but not knowing quite what to do with themselves.

The resplendent St. Andrew’s Church, a stone’s throw away from the family home of Mikhail Bulgakov the author of ‘Master and the Margarita’ 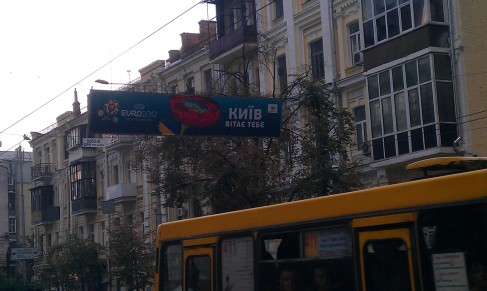 I also made my way to the Olympic Stadium, a ground which is surprisingly close to the central boulevard of the city, Kreschatyk.  When I made it there, there seemed to be a political rally on, I wasn’t allowed in through the turnstiles and once more you got the ghostly feeling of coming to a party just after it had finished.

Several days later I arrived in Lviv.  Lviv’s history is tied much more closely to the West than that of Kyiv.  With Baroque churches and cobblestones the city is like a little Vienna, or, as many Poles will tell you, a larger Krakow.

What remnants of Euro2012 were left in the city?  First of all, quite shamelessly I did not make it out to the city’s stadium, I had it on good authority that to get there one needed to take a 30 minute bus and then walk for another 15 minutes.  Sorry but I had other things to do in the place!

I did however find some little signs of the finals.  Like in Kyiv, banners lined the streets bearing witness to what had been and there were teasing hints that freewifi had existed in the city during the tournament, unfortunately the connection didn’t work, further cementing the ghostly experience of being in the city after the event had ended.

So it wasn’t a particularly electrifying Euro2012 hunt in the two cities but I suppose it underlined the surreal quality of these major tournaments.  As we are seeing with the Olympics in England, these events are prepared for over many years, millions of pounds are poured into them, thousands of manhours are put in and finally the event comes and passes in one glorious haze.

In the end we wake up and it’s back to the humdrum.  Hopefully this blog helped you enjoy the haze as it engulfed you in Poland and Ukraine in June 2012.  I enjoyed it, hope you did too.