It’s been a gripping season at Rightbankwarsaw towers, full of the sublime and the ridiculous, the wonderful and the banal, the unbelievable and the predictable.  We thought we’d share some of our best moments of the just finished Ekstraklasa season and hand out some rather unorthodox awards, so strap on your seatbelts and make sure that little Jimmy doesn’t lean too far out of the carriage, this could be a wild and dangerous ride.

The season in two paragraphs because, be honest, you want it short and sweet

As every season in Poland, the favourites were Legia Warsaw due to their immense budget by Polish standards and, when added to the fact 2016 was their centenary year, the pressure was really on for them to run away with the title.  This didn’t happen primarily because of the little known force – Piast Gliwice – who, while playing some scintillating football, led the team from Warsaw for most of the season before just falling short in the closing stretch.  The other side to watch in the first half of the season were Cracovia, whose great attacking football coupled with rather shabby defending, thrilled crowds.  Despite the challenge from these two Legia’s superior squad-depth, and the goals of Nemanja Nikolić meant they lifted the title aloft at the end of the season.  Along with Legia, Piast and Cracovia, the other European qualifier was Zagłębie Lubin, whose signing of Filip Starzyński in the winter transfer window drove the newly promoted side to an impressive third placed finish.

The side that really fell short was Lech Poznań the 2014-5 season champions, who plummeted to the foot of the table in the autumn, a fact that resulted in the sacking of manager Maciej Skorża.  Under Jan Urban they managed to improve but still had a very disappointing season by their standards.  Both Śląsk Wrocław and Jagiellonia Białystok were not able to juggle European football and the league and finished comfortably in the bottom eight.  The sides that didn’t make it in the end were Podbeskidzie Bielsko-Biala and Górnik Zabrze who took rather different paths towards relegation.  Podbeskidzie nearly finished in the top eight which guarantees survival but didn’t due to a bizarre set of circumstances (more below) and subsequently collapsed at the end of the season.  Górnik had an awful season and the only reason they had a chance of staying up at the end was due to the Ekstraklasa’s points division after 30 rounds.  Górnik might make their way back next season but it would be a surprise if the team from Bielsko Biała do.

Now without further ado let’s get down to the fun part – introducing the rightbankwarsaw awards for the 2015-6 Ekstraklasa season! (Insert drum roll special effect)

1) The Leslie Nielsen award – Dane Nickie Bille Nielsen filmed his Lech Poznań team-mate Łukasz Tralka on the way to the Polish cup final. So far so good. It got worse when Trałka started to say not very nice things about Lech fans who were banging on the team bus as it left for the final. Even worse Nielsen put the video online. He didn’t play in the final which Lech eventually lost 1-0 to Legia.

Which leads us nicely to

3) The Jimmy Glass award – Glass’ last-gasp goal famously saved Carlisle their league status. It wasn’t the case with Sebastian Nowak’s goal for Termalica Bruk-Bet Nieciecza, but it was nice nonetheless. Nowak scored one goal in 2016, almost as much as Pogoń Szczecin’s entire forward line.

4) The village people award – Termalica hail from Nieciecza, a village of just 700 people in the South-East of Poland. The tiny club with a stadium surrounded by corn fields performed admirably in staying up, they even guaranteed their Ekstraklasa status with one game to spare.

5) The best use of public money award – the City of Chorzów  paid an 18 million zloty (3 million pounds) loan to Ruch so they could get an Ekstraklasa licence for next season. More here – http://www.wsc.co.uk/wsc-daily/1209-april-2016/13193-ruch-chorzow-controversially-bailed-out-by-city-council

6) The totally pointless massive stadium of the year award – Śląsk Wrocław’s ground –  built for Euro 2012 – gets on average less than 9 thousand fans for a match. It holds over 42 thousand.

7) The best team of the season award – They had their ups and downs and didn’t perform as well as they might but it’s hard to look past Legia Warsaw who did the double under Russian manager Stanislav Cherchesov.  Which leads us on to…

8) The best mustache of the season award – Poland’s known for its mustaches but the former Russian national team goalkeeper Stanislav Cherchesov raised the bar with his foreign tache.  If he leaves in the summer, it’s the mustache that will be missed the most.

9) The goal of the season award – Lechia Gdańsk’s Flavio Paixao must be up there.

10) The Shining twins of the season award – Michał and Mateusz Mak. For the first time they played for different teams and it didn’t turn out bad at all for them.

11) The Bohumil Hrabal award – Piast Gliwice were so very nearly Poland’s answer to Leicester City. Piast had a Czech manager, Radek Latal, and had 5 Czechs and Slovaks in their line-up as key players. Some of them have already said “na schledanou” though.

12) The couple of the season award – Daria Kabała from Canal Plus interviewing her husband Arkadiusz Malarz of Legia. 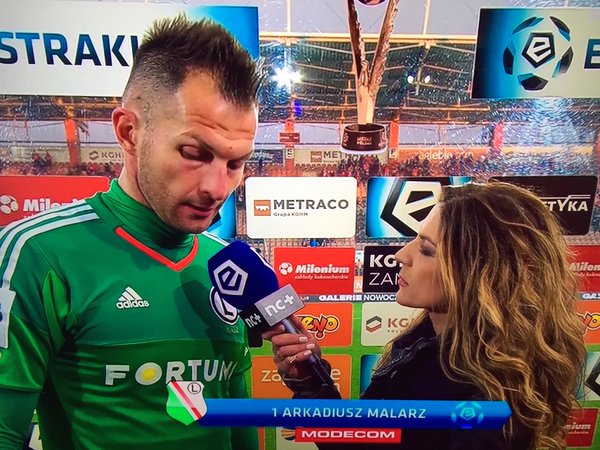 13) The Rivaldo feigning injury award – Goalkeeper Bartłomiej Dragowski (Jagiellonia Białystok) is talented, but he’s still a keeper and they are different. Here he thought he’d been hit by a lighter…

14) The most efficient performance of the season – Podbeskidzie Bielsko-Biała went 2 up at Jagiellonia without having a shot on goal. It didn’t help them in the end as they totally fell apart in the bottom group and went down.

15) The Newcastle traditional club going down award – The City of Zabrze built a wonderful large modern stadium for Górnik for over 4 years. And when they finished it Górnik went down.

16) The comedy villain of the season award – Jakub Tosik of Zagłębie Lubin – Tosik ambles round the pitch launching into anything that moves, something that earned him 9 yellow cards in just 24 league games.  How he didn’t get sent off this season is anyone’s guess.  Attracts the ire of many an Ekstraklasa supporter but is a surprisingly effective player.

17) The most missed player in the spring award – Deniss Rakels of Cracovia – Rakels was a revelation for Cracovia in the autumn round of matches – scoring 15 league goals, something that was second only to the rampant Nemanja Nikolić.  Despite his departure to English club Reading in the winter transfer window, Rakels was still in second place at the end of the season.

18) The best fan confrontation of the season award – Jagiellonia Białystok’s manager Michał Probierz. Probierz wears his heart on his sleeve, and after going through a tough period of time on the pitch the fans were getting on his back.  Probierz decided to fight back and gave them a piece of his mind.  He’s still in his job.

19) The ‘we’ll take a point’ award of the season – Pogoń Szczecin – Pogoń drew a whopping 16 times in 37 games – wherever the match was played, whatever the opponent you could count on them to take a precious point back to the dressing room, unless they needed to win – and the point wasn’t all so precious.  The Ekstraklasa obviously prefers shouting managers to ones who draw, Pogoń didn’t renew Czesław Michniewicz’s contract at the end of the season.

20) The French new wave that no one understands award – Read for yourself – https://rightbankwarsaw.com/2016/04/13/another-fine-mess-the-ekstraklasa-with-eggs-on-their-faces/

Thanks for being with us at the awards ceremony, see you next season when more wonders will emerge – hopefully.  If not stick with us anyway.