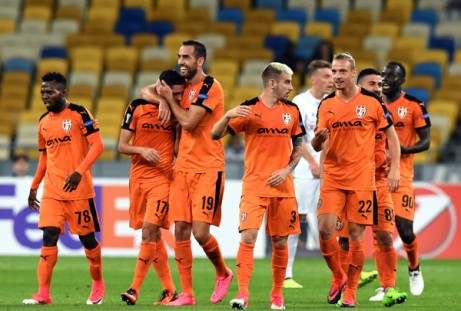 For the last in our series (you can find parts one and two and three here here and here) about under and over-achievements in the 2017-8 European qualifying rounds, we now turn to the situation in Albania.  There it’s KF Skënderbeu Korçë that are leading the way, Skënderbeu became the first Albanian side to make the group stages of a European competition (The Europa League) in 2015 and this season they have repeated the trick.

After finishing third in the Albanian Superliga, Skënderbeu started off in the first qualifying round of the Europa League at the end of June but after beating the Andorran club Sant Julià, the Kazakhs of FC Kairat, the Czechs Mladá Boleslav and finally the Croats of Dinamo Zagreb they made the Europa league group stage.  In the group they will face Dynamo Kyiv, Young Boys and Partizan Belgrade.  They started splendidly in the first game at Dynamo, taking a 1-0 lead into half-time before the Ukrainian stormed back to win 3-1.

Hi Enxhi, can you explain the roots of Skënderbeu’s success this season and over the last couple of seasons?

Hard work and organisation have made the difference regarding Skënderbeu.  I was there, in May, at the Albanian Cup Final against KF Tirana (which in the meanwhile had been relegated to a lower division in the championship) lost by Skënderbeu: it looked like the ‘great era’ of the team of Korçë was over, but this was not the case.  Credit goes to the club that managed to keep the important pieces of the team but credit goes also to the players that made it possible to rise again during the Europa League qualifying matches.  Regarding organisation, Skënderbeu is the only football club in Albania that operates as the other great clubs in the Balkans: it acquires young talents from Kosovo or from other Albanian teams, it boosts their skills, and then sells them again for amounts never seen before in the Albanian championship.  This of course facilitates all the efforts because with a great budget you can move as you desire in the transfer market, you can improve your infrastructure and, most of all, you can invest in the youth sector.

How would you describe the state of Albanian domestic football?  Would you say it is improving or regressing?

Albanian football is making progress, even if really slowly, thanks to Skënderbeu. They are raising the bar high and this makes the other clubs increase the efforts if they want to compete at certain levels, in Albania and in Europe.  I’m mostly thinking about Partizani and Kukësi that have invested a lot in the past few years and at least for Kukësi the first results came last year with victory in the championship.  Moreover there is a change of mentality on its way: Albania has always been characterised by bought and sold matches linked to organised gambling (for this very reason Skënderbeu in the past season could not participate in UEFA competitions), even in friendly matches.  However this year, for the first time ever, FederBet (the agency that deals with betting anomalies) has declared that there were no suspect matches for Albanian teams in the qualifying stage of the Champions and Europa League.  This already represents a small revolution.

Are the success of individual clubs purely down to those clubs or have administrative changes/reforms of the Albanian FA assisted?

It is entirely the product of the Albanian clubs.  Despite the growth that football is experiencing in Albania, the Federation is not taking any considerable decisions in order to facilitate with some reforms the work of the Albanian clubs.  A small example: there has been a lot of discussion for many years about the possibility of removing the maximum number of foreign players on the pitch for a team (4), that would really help the process of growth of the Albanian teams.  Despite this, however, the Federation has never taken a strong and open position on this.  Many say that this would not help the National Team, and I cannot figure out why, considering that, even in the current situation the Albanian championship provides only two players to the National Team lead by Pannucci (of which one is the third goalkeeper).

How do you see Albanian domestic football developing in the future?

I think and I hope that we will become a ‘small Croatia’, a place where the great European clubs can go in search of new talents.  In order to do this, however, a certain level of football has to be achieved, maybe the constant presence of our clubs in at least the Europa League: there is still a long way to go but I am sure that one day we will have fun.

What do you think of UEFA’s new reforms making it more difficult for smaller clubs to qualify?

I am really sorry about the new UEFA reform, because for the Albanian clubs if it was really hard to qualify in the Champions League now it becomes practically impossible. However from a certain point of view I do understand their decision, because in recent years the group stage of the Champions League have become really boring even due to – I am sorry to say this – small clubs that qualified.

Would you like to see a new third competition being developed by UEFA?  Is so, what should it look like?

The creation of a third UEFA competition for the ‘small clubs’ would widen the gap between them and the medium-sized clubs of Europe.  For this reason I do not agree, because the goal should be another one, that is the balancing as much as possible of the difference in level between European powers and small clubs.

Thanks go to Enxhi, who you can follow here.  We hope you’ve enjoyed the series!

Error: Twitter did not respond. Please wait a few minutes and refresh this page.

There was an error retrieving images from Instagram. An attempt will be remade in a few minutes.